A long time ago (1999’ish) in a land far away (Dunedin, New Zealand), I was getting horridly drunk at a well known bar called the Captain Cook Tavern with my friend Matt. After WAYYY too many bourbon and Coke’s, we eventually left The Cook and wandered a few blocks until we saw this big old church with a line outside. The people at the door told us to come on in and I was like “dafaq would we go in there for?”. Matt wandered in, so I tagged along too and was surprised to see they’d converted this old church into a night club called “The Mission” (later called The Monkey Bar)! After refilling with bourbon and Coke and making a jack arse of myself in a failed attempt to pick up women, I made my way to the toilets.

I was taking a slash in the urinal when an extremely drunk dude who looked kinda familiar stumbled in. He shoved me out of the way mid-flow and proceeded to hurl in the urinal. There was a guy to my left, a guy to my right, and I sure as hell wasn’t about to pee on them. And since I was so drunk, stopping mid-flow was not gonna happen, so I just proceeded to pee on the drunk guy. I was still mid-flow when he turned his head and said “thanks mate!”, then barfed a little more.

It wasn’t until that moment he turned his head that I realised I was peeing on well known Kiwi celebrity Marc Ellis. He was back at the bar again drinking beer after that. You’d think being that drunk, having vomit on yourself and smelling like someone elses urine might get you kicked out, but apparently not 😉 I guess they don’t tend to throw out famous people no matter how drunk they get!

Marc Ellis is famous for being the creator of New Zealands National Nude Day, and is also a famous rugby player, who holds the world record for the most tries scored in an international rugby game when playing for the New Zealand All Blacks against Japan in 1995. He has also been in trouble with the police for offering prizes for streaking at sports events and tricking people into thinking the volcano on Rangitoto island was erupting, by setting off 600 kg of explosives on it. He can now add being pee’d on by me to his list of achievements in life 😀

The church is now being used by the Dunedin Symphony Orchestra. I wonder what other crazy activities will occur in the place in the future.

EDIT: In response to this tweet, Björn Johansen responded with “So you pissed on a celeb in the church where the symphony orchestra is? I think you just won life.” 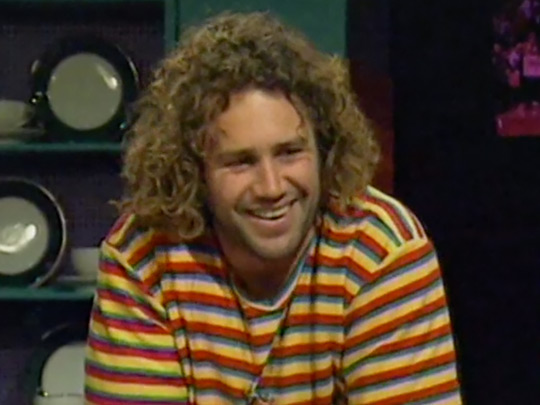 Marc Ellis – on the set of the Sportscafe TV show. This was one of my favourite TV shows back in the day.