I went camping on the weekend with Ed Waite and Dave Patchett to Poolburn reservoir. We headed off on Friday evening packing tents, as much cold weather gear as we could find and a set of chains in the back Ed’s trusty Toyota Landcruiser. The road up to lake Poolburn was nicely frozen and easy to drive on, apart from a large puddle which Ed decided to travel through instead of around. The puddle was frozen, but apparently not enough to support the weight of a fully laden Toyota Landcruiser but Ed’s ninja awesome four wheel drive skills saved the day and we managed to get out of the ice hole in one piece (sort of …). We found a neat little flat spot perched above the dam where we set up camp with a beautiful view out across the frozen reservoir. 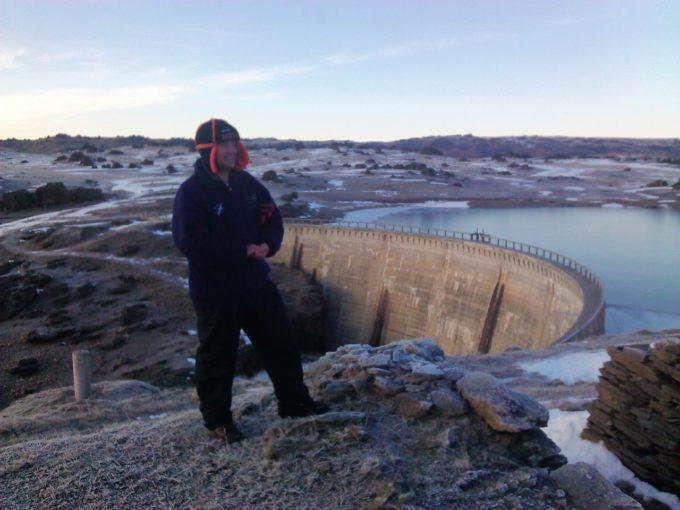 Dave Patchett at the camp site above Poolburn dam 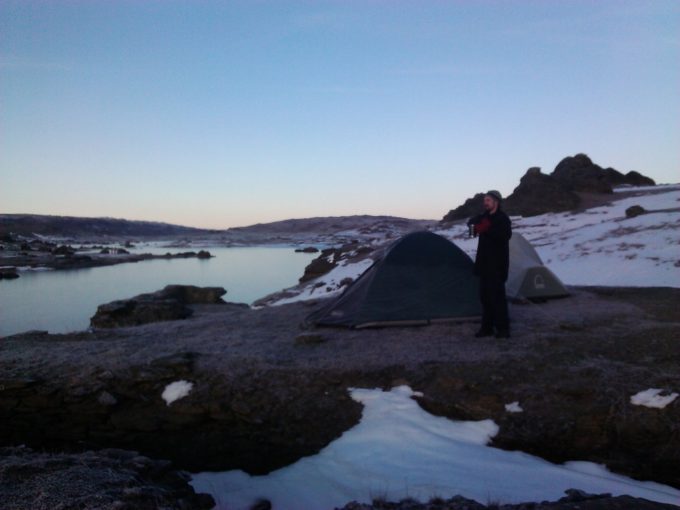 Ed Waite chilling out at the camp site

We quicky discovered that camping in sub-zero temperatures is quite cold, duh! We never took an accurate temperature reading, but from what we could tell it was approximately -8° C. Thankfully we were kitted out well enough to survive the night without any dramas, just a little chilly at times.

We awoke to a beautifully calm, albeit chill day and an excellent view from the campsite, out across the Poolburn dam. 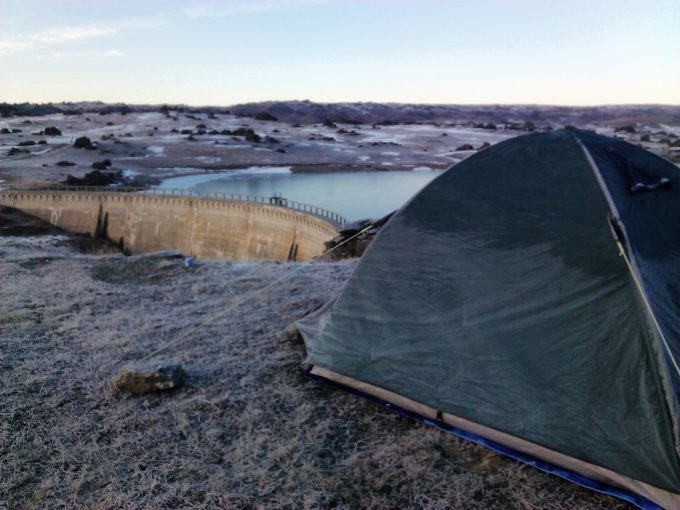 View north from the campsite 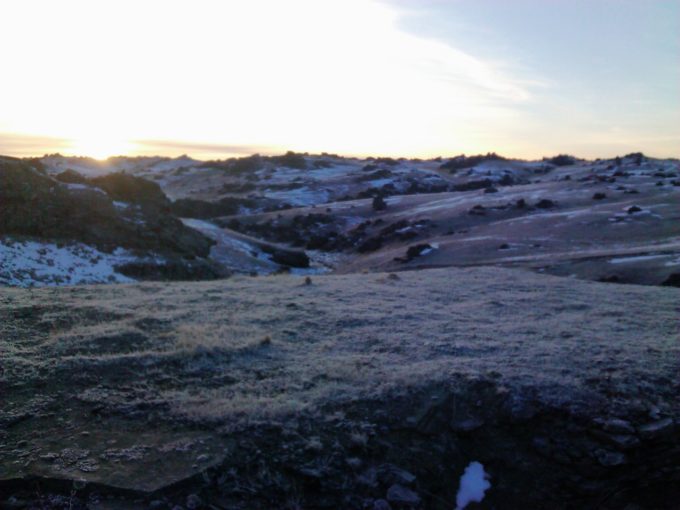 Ed Waite and Dave Patchett on the ice

We were greeted at the lake shore with an excellent expanse of solid hard ice to skate on. We did a full circumnavigation around the lake, including many sections we had never skated on before due to the water level having risen considerably this year. 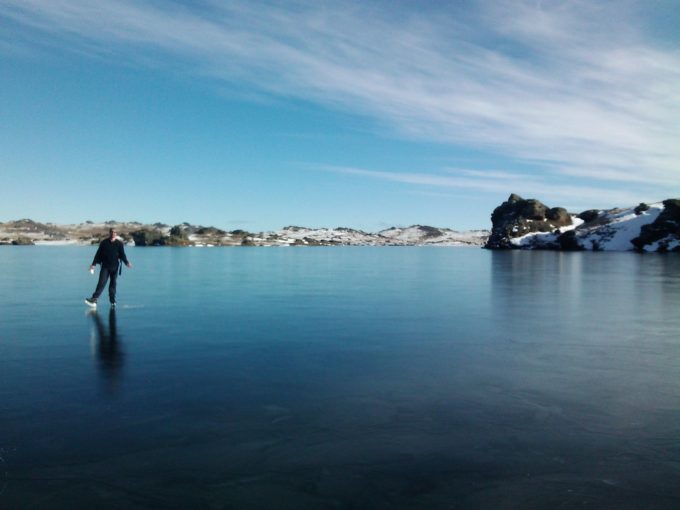 Ed Waite on the ice 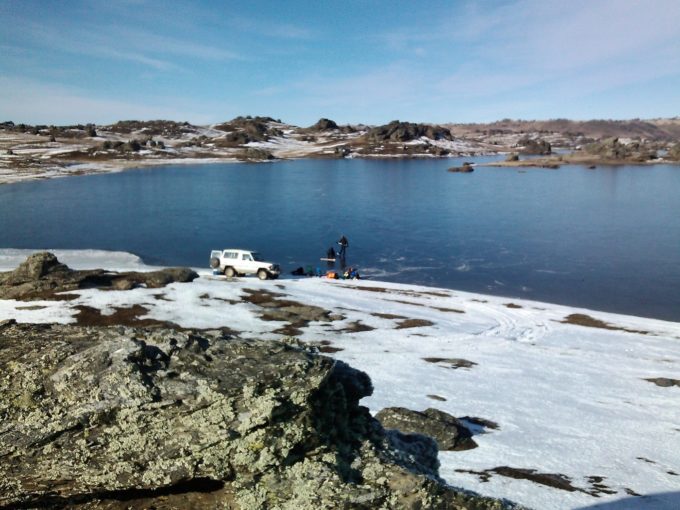 Ed Waite and Dave Patchett on the ice 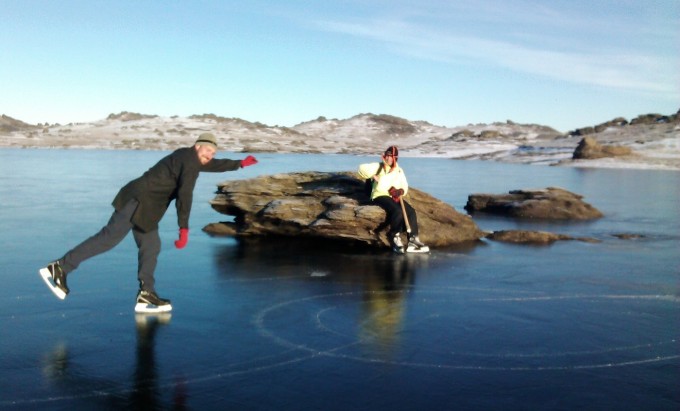 Ed Waite showing off whilst Dave takes a break 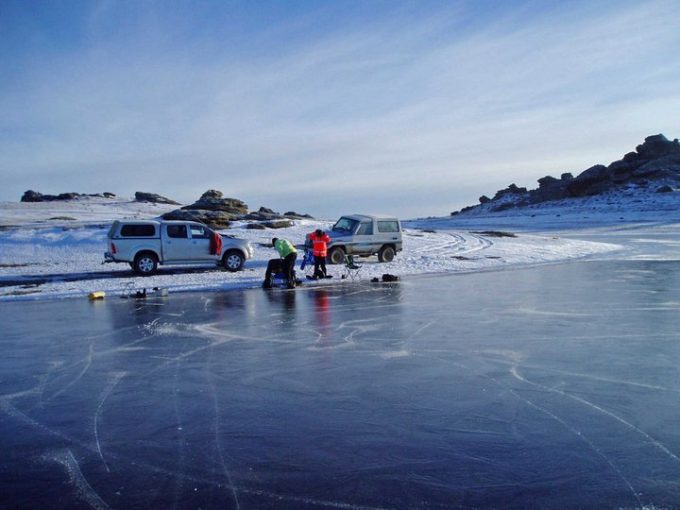 View back to truck from the ice. Dave Patchett on the left and me (Ryan Hellyer) on the right. Thanks to Ed Waite for the photo. 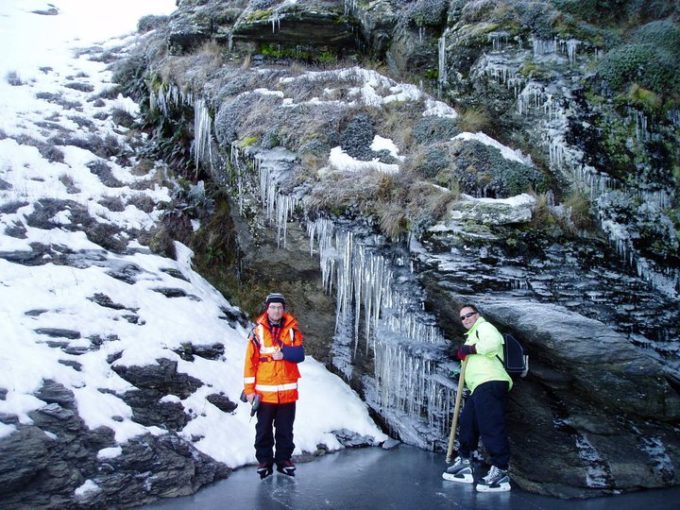 There were some massive icicles alongside the cliff area by the dam. Ryan Hellyer (me) on the left and Dave Patchett on the right. Thanks to Ed Waite for the photo.

There were some excellent sections of ice on the streams leading into the dam. It was really fun being able to skate downhill for hundreds of meters. 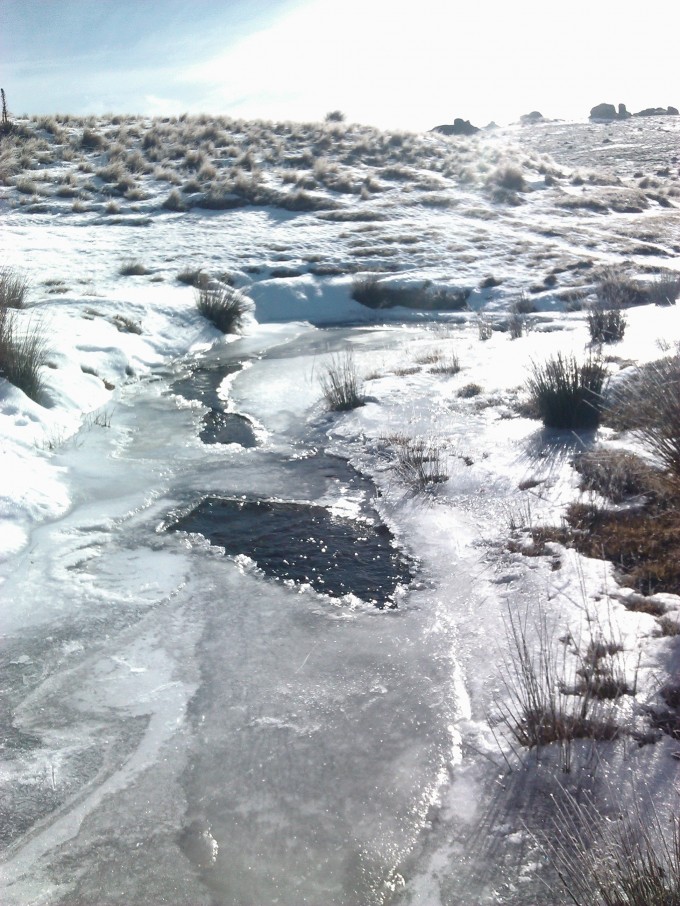 Downhill skating ... with a little water hopping 😀 The segments of open water were mostly jumpable or could be avoided by skating down the edges of them. 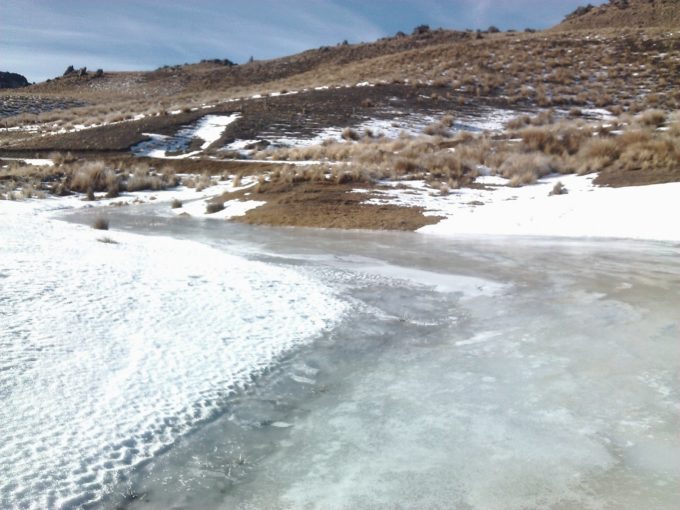 Downhill skating. This particular section was a little 'cheesy' but was totally frozen over so less worries about falling into water. 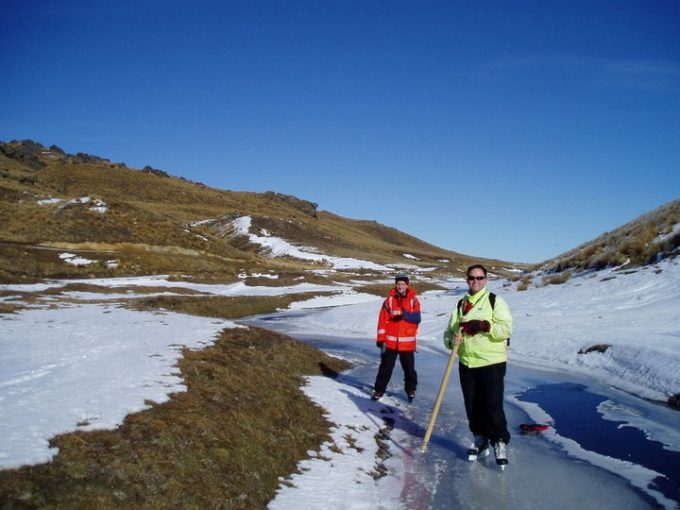 Ryan Hellyer (me) and Dave Patchett standing on a frozen stream. We managed to skate downhill in that stream for a few hundred meters. Thanks to Ed Waite for the photo.

Ed and I headed to Alexandra later in the day to have a skate on the Lower Manorburn dam before heading back to Poolburn. We had an excellent skate under the stars at Poolburn before heading to bed for the night. Unfortunately the weather packed in really badly and blew our tend down in the middle of the night! Thankfully we were well prepared and didn’t get too cold despite the battering from the wind and some snow blustering in through the tents ventilation holes.

We had a very windy skate across the reservoir first thing in the morning. It was certainly an interesting experience being able to just stand their and be pushed along by the wind at break neck speed.

On our way back to Dunedin we got caught in a fairly bad snow storm. Lots of cars fallen off the side of the road, a bus full of tourists careering backwards down the Kilmog hill and many silly drivers still attempting to make their way back to Dunedin grossly unprepared. Thankfully Ed’s Landcruiser was well up to the task and after Ed and Dave kindly put the chains on the truck in horrid conditions (whilst I took stood around taking pictures) we had no problems making our way back home. 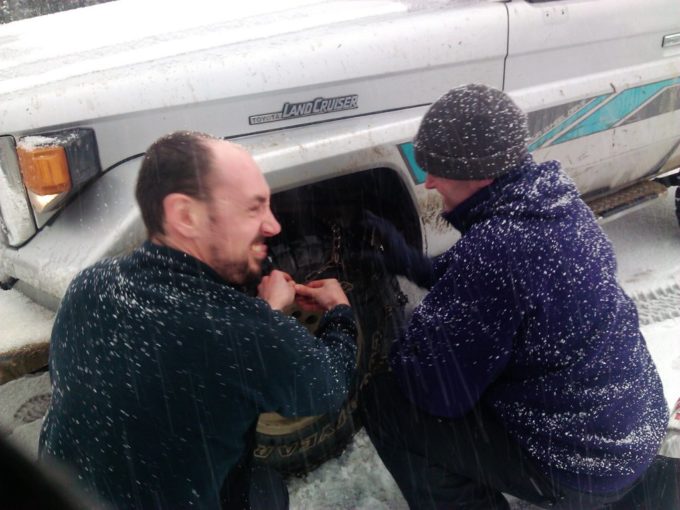 Ed and Dave attaching the chains to the mighty Landcruiser 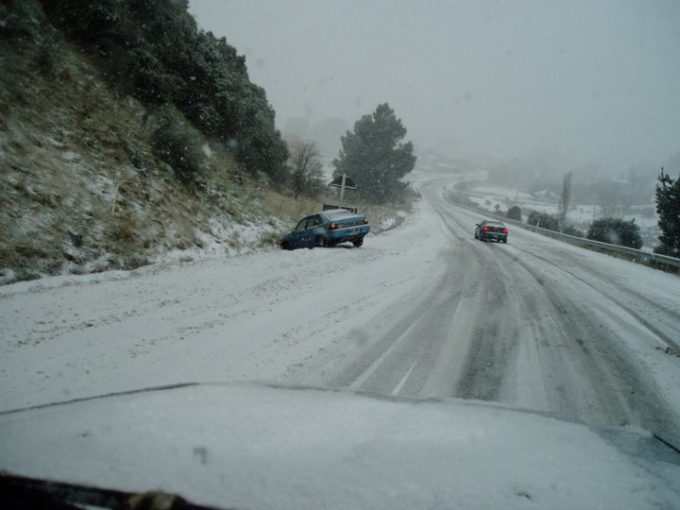 End of the carnage on the Kilmog hill. Apparently some people think it's perfectly sensible to drive on crazily icy roads with no chains or four wheel drive!? Thanks to Ed Waite for the photo.

3 thoughts on “Camping at Poolburn reservoir”