For those of you who aren’t aware, Vicki Agyle and I have recently returned from a whirlwind tour of Hong Kong, Israel, England, Germany, Belgium, Netherlands and Japan.

Despite everyone’s insistence that we would be blown up the moment we reached Tel Aviv, we ‘braved’ it anyway to make our way to the ICCC38 (International Coordination Chemistry Conference 38) in Jerusalem.

The heat walking off the plane was extreme. We quickly noticed that there was no air conditioning in the airport, so we headed outside to enjoy the sunny weather … except it turned out that there was air conditioning in the airport afterall! The heat and humidity outside was incredible. Our attempts to take photos of the scenery failed, as the lenses fogged up immediately due to the extreme humidity. 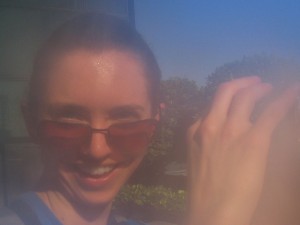 The only reasonable photos I managed to take were from inside the terminal. Below is my first real attempt at creating a 3D parallel view image. If you look through the page and merge the two images into one, you will see the view in 3D. Don’t go straining your eyes too hard though :p

Our trip to Hong Kong was short and sharp, just a brief stopover before heading to Amsterdam for what was supposed to be another short visit in transit. Except it turns out we got confused and in fact had a day and a half there, so had to quickly arrange accomodation! The photo below is another 3D image, this time of a random Amsterdam canal (they have lots of them). More photos of the Netherlands will be coming later as we went back there for a proper visit later on. 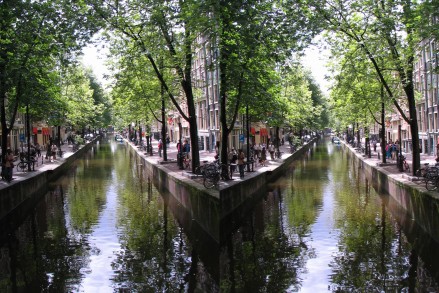