Marathon completed! 4 hours 57 minutes. I’m no Kenyan, but I’m just glad to have made it to the finishing line in one piece 😀

I do however seem to excel when I challenge myself and I decided to challenge myself to do a marathon. My motivation for this began whilst trying to rehabilitate myself from repeat shoulder dislocations. My dinosaur loving friend Liz (who has a blog you should check out) was encouraging me to run during my warm ups for my shoulder exercise routines, so I did. I then discovered I could run a lot further than I thought. I could comfortably run 4 km on a treadmill and still happily do my shoulder workout afterwards.

Liz then encouraged me to run further, so I did, I ran 6 km. Unfortunately at that point my shoulder re-dislocated and it became so loose that running more than 3 km was too hard and later on I ended up not being able to run and after a few more shoulder dislocations even walking quickly became hazardous. Fast forward a year, and I was recovering from surgery which I required to properly fix my ongoing shoulder problems. At that point I moved to Norway and decided I needed to boost my overall fitness level because I had become extraordinarily unfit before and after surgery.

The CEO of my new employers waltzed into the office one day and asked me if I’d like to compete in a 10 km running race in Oslo; a lot of my officemates were also competing. I decided that was a sufficiently difficult goal and worth at least having a crack at. I wasn’t sure if I could actually do it. Only a few weeks before he asked that question I had been struggling to walk more than a few kilometers let alone run 10.

Two months of gradual increases in fitness level and I managed to splutter my way across the finishing line. It was not a pretty site, I was somewhat of a mess and was probably close to passing out. At that point I realised I was actually capable of doing this long distance running thing if I put my mind to it. I muttered a little that day about potentially doing a half-marathon at some point. I thought that maybe after a year of training I would able to do it. Three months later I decided I was already fit enough that I could have a crack at it and was going to sign up for the Oslo Half Marathon. Unfortunately an old achilles tendon injury flared up at that point and I realised that doing a half-marathon was a horridly bad idea.

Around a month after I missed the Oslo Half Marathon, I decided to go for a run to see how far I could run despite almost zero training during the proceeding two months. I then proceeded to run uphill for 10 km, then back downhill for another 10 km, so almost a half-marathon and over much trickier terrain than the Oslo Half Marathon was on. I wasn’t as worn out as during the 10 km race earlier in the year and felt I could have run further if I absolutely had to.

Around this time I realised doing a half-marathon was a waste of time; I knew I could do it and if I trained for it, then it would actually be quite easy. So I decided to aim for a loftier goal, the full marathon. Unfortunately, I’ve had constant problems with my achilles tendon injury flaring up. I did a couple more ~20 km runs over varying terrain despite minimal training and found that if I was careful about stretching and warming up my ankle, that I could avoid the injuries I had been suffering from until then.

On advice from my work colleagues Petter and Simen I decided to do a test run of 30 km around a lake called Sognsvann here in Oslo. 2 hours and 28 minutes later I’d clocked in 21 km and I eventually rounded out the full 30 km although I don’t have an exact time on it as my running watch ran out of batteries :/ I wasn’t running very fast towards the end of my 30 km run, but I wasn’t walking at least and I felt I could have kept going for quite a while if I needed to. Another couple of months have passed since then and I’ve been mostly running 10 km every week or fortnight depending on how well my achilles is feeling and how busy my schedule was.

The Oslo Marathon is tomorrow. I am the fattest I have ever been in my life. I am about to run the furthest I have ever run in my life. I have mild cold. I feel gross unprepared. Am I worried? Not really. The worst case scenario I see occurring is that I have to pull out. It is possible that I won’t be able to walk properly during the week or so after the event, but it shouldn’t cause any permanent damage.

I’ll be posting my whereabouts during the marathon to a special Twitter account I setup for the purpose. I won’t be uploading the data constantly during the event as my phone will run out of batteries before it’s over if I do that, but I’ll try to drip feed every 30 mins or so.

I’m vaguely aiming for a finishing time around five hours but it may be significantly faster or even significantly slower. Not having run 42 km before I have no idea what to expect. I don’t even know how long my 30 km test run took as my watch conked out part way through. 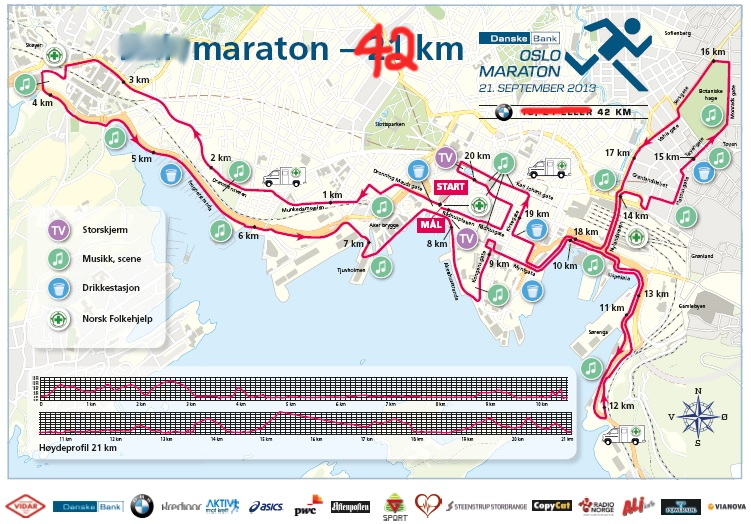 This map shows the route for the last half of the full-marathon. The first half involves a double loop of the western side of this map.